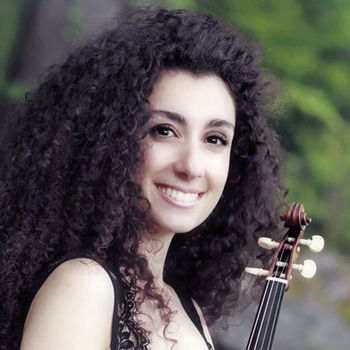 Chouchane Siranossian is one of the leading virtuosos on the international Baroque scene today, both as a soloist and alongside many prestigious orchestras. Her mastery of the instrument, nourished by her musical research and her exemplary experience, has made her a highly sought-after musician of marked individuality. When Chouchane is not on stage or researching, she devotes herself to her passion for mountaineering and ski touring.

She began studying the violin with Tibor Varga in Sion, then was admitted at the age of fifteen to Pavel Vernikov’s class at the Conservatoire National Supérieur de Musique de Lyon. In 2002, she began training with Zakhar Bron at the Musikhochschule Zürich, and obtained her soloist’s diploma with the highest honours in 2007. Shortly afterwards she became concertmaster of the Sinfonieorchester St. Gallen (Switzerland), where she remained until her decisive encounter with Reinhard Goebel. She then devoted herself intensely to the study of early music with him at the Salzburg Mozarteum and regularly worked with him as a soloist.

She is leader of the Esperanza ensemble, founded in Liechtenstein in 2015, which was awarded an Opus Classic award in 2018 and with which she regularly tours.

Her first solo album, Time Reflexion, was awarded a ‘Diapason Découverte’ in 2015. Her recording of the Mendelssohn Concerto with Anima Eterna Brugge (In Time) and the CD L’Ange et le Diable in duo with Jos van Immerseel both received numerous prizes, including two ICMA (International Classical Music Awards, in 2017 and 2019). Her latest solo recording was released in March 2020: Tartini’s concertos with Venice Baroque Orchestra and Andrea Marcon. For this album she received the ‘Preis der Deutschen Schallplatten Kritik’ in March 2020.

Chouchane Siranossian is an exclusive artist of Alpha Classics.

In Season 2020/21, Siranossian will play concerts with Venice Baroque Orchestra and Cappella Mediterranea as well as with Dresden Festival Orchestra at Kulturpalast Dresden. She will be a guest in Versailles with the ensemble Le Concert Spirituel. She also tours with Andrea Marcon and Leonardo García Alarcón and makes her debut with Bamberger Symphoniker. In the 21/22 season she is on tour as soloist with Les Siècles.

Chouchane plays on two violins: A Baroque violin by Giuseppe and Antonio Gagliano, and a violin by Domenico Montagnana made available courtesy of Fabrice Girardin, luthier at La Chaux-de-Fonds.

“It is the privilege of exceptional artists to attract the limelight. The violinist Chouchane Siranossian belongs to that category.“
Diapason