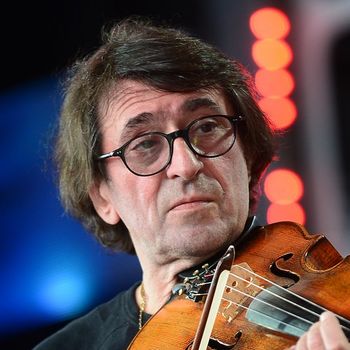 There are certain musicians who God and Fate have destined to follow an artistic path by way of which they become figures in the art of music who open new horizons for future generations. Yuri Bashmet is undoubtedly such a musician, having established the viola as a leading instrument on the contemporary concert stage.

Yury Bashmet is one of the few contemporary musicians whose authority is universally respected.

Film and television companies several countries, including England, France and Russia, have documented Bashmet’s artistry. The Maestro  himself has created and serves as host of the television program “Station of Dreams.”

Yuri Bashmet was born in 1953 in Rostov-on-Don. In 1971, he graduated from the Lvov Special Musical Middle School and entered the Moscow Conservatory, where his teachers were Professors Vadim Borisovsky

and Fyodor Druzhinin. While still a student, he received awards at international competitions in Budapest, in 1975 (2nd prize), and Munich, in1976 (1st prize). His phenomenal gifts as a musician were widely noted at the time. “In terms of interpretive perfection and brilliance of tone, he can only be compared to David Oistrakh,” wrote a German newspaper.

Contemporary composers – among them, Alfred Schnittke, Sofia Gubaydulina, Edison Denisov, Mikhail Tariverdiyev, John Tavener, Ghia Kancheli and Alexander Tchaikovsky – have specially composed for him or dedicated to him more than 50 works.

Yuri Bashmet took up conducting in 1982 and, in doing so, brought added luster to his reputation as a bold and fearless contemporary musician.

Since 2002, Bashmet has served as Artistic Director and Chief Conductor of New Russia State Chamber Orchestra. Subscription concerts in the major concert halls of Moscow have revealed the scale Bashmet’s musicianship. Masterpieces of Russian music, works by Tchaikovsky, Rachmaninov, Rimsky-Korsakov, Prokofiev and Shostakovich; European classics, the music of Bach, Mozart, Beethoven and Schubert; and contemporary works by such composers as Schnittke, Gubaydulina and Kancheli – in all of these, the polished interpretations of the Maestro have served reveal the secrets of their musical language.

Yuri Bashmet and Sviatoslav Richter enjoyed a long-standing artistic friendship and performed together in many concerts in Russia and abroad. Richter served for 16 years as Artistic Director of the worldrenowned “December Nights” festival in Moscow. Following Richter’s death, that position was inherited by Bashmet.

Bashmet is the founder and chairman of the world’s first and only viola competition, which takes place in Moscow.

Bashmet has participated in many important charitable events: at Carnegie Hall in New York, together with Elton John and Stevie Wonder; in London, in memory of Princess Diana; and in concerts dedicated to

raising funds to assist those who suffered from natural disasters in Armenia and Japan and in aid of handicapped children.

It is difficult to overestimate Bashmet’s contribution to world peace. As a citizen of the world and a brilliant musician, his name belongs among those of the leading figures of the 20th and 21st centuries.

“Yuri Bashmet, as an outstanding violist and one of the world’s great

musicians, has revived interest in the viola.”