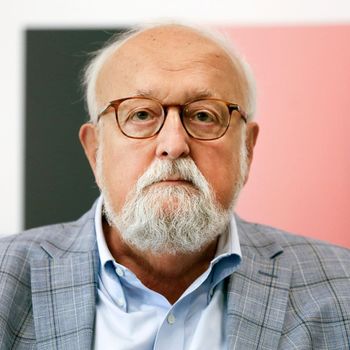 In 1959, he composed Threnody for the Victims of Hiroshima, one of his best known and most often performed compositions, which received the UNESCO prize in 1961. This piece was followed by Anaklasis (Donaueschinger Musiktage), Polymorphia (commissioned by the Norddeutscher Rundfunk Hamburg), Fluorescences (Donaueschinger Musiktage), and, in 1966, St. Luke Passion, the first major work of his career. It was written for the Westdeutscher Rundfunk in Cologne to mark the 700 years of the Münster Cathedral, where it had its premiere on 30 March 1966. This performance brought Penderecki to international fame and started a run of success.

In 1972 the composer began his career as a conductor. Since then he has led the world’s greatest orchestras. He was first guest conductor of the Norddeutscher Rundfunk Orchester in Hamburg and the Mitteldeutscher Rundfunk Sinfonie Orchester in Leipzig. From 1992 to 2000 he served as Music Director of the Casals Festival in San Juan, Puerto Rico. In 1997 he became the Artistic Director of the Sinfonia Varsovia orchestra. Since 1998 he has been advisor to the Beijing Music Festival, and since 2000 guest conductor of the China Philharmonic Orchestra.

Born on 23 November 1933 in Dębica, Poland, Krzysztof Penderecki studied composition under Franciszek Skaryszewski, and later at the Kraków Academy of Music under Artur Malawski and Stanisław Wiechowicz.

From 1973 to 1978, Krzysztof Penderecki was professor at the Yale University, New Haven. During 1972-1987 he was Rector of the Academy of Music in Kraków, and in the years 1987-1990 the Artistic Director of the Kraków Philharmonic. He is an honorary professor of many art academies, including the Moscow Tchaikovsky Conservatory, the Beijing Conservatory, Academia Argentina de Musica, the Academy of Music in Riga, Rimsky-Korsakov Conservatory in St. Petersburg, the Komitas State Conservatory in Yerevan, and Die Hochschule für Musik in Würzburg.

On 14 December 2005, Professor Krzysztof Penderecki was honoured with Poland’s highest decoration – the Order of the White Eagle. On 12 October 2006 the composer received the Three Star Order in Riga.

In April 2008 Krzysztof Penderecki was honoured with the Gold Medal of the Minister of Culture of Armenia and received the Eagle Award 2008 for Best Film Score for Andrzej Wajda’s Katyń.

On 5 May 2008 in Bremen, he conducted the world premiere of the Concerto for Horn and Orchestra “Winterreise” withRadovan Vlatković as a soloist. On 22 November, the jubilee Krzysztof Penderecki Festival in Warsaw witnessed the premiere of the composer’s String Quartet No. 3 “Leaves of an Unwritten Diary”. In 2009 Krzysztof Penderecki received the Ordre de Mérite du Grand-Duché de Luxemburg and the Order of Honour from the President of the Republic of Armenia.

The composer was invited to join the Honorary Committee of the Chopin Year 2010 celebrations at the Embassies of the Republic of Poland in Lisbon, Tokyo and Rome. 14 January 2011 in Warsaw saw the premiere of A sea of dreams did breathe on me... Songs of reverie and nostalgia for soprano, mezzo-soprano, baritone, choir and orchestra, which was commissioned by the Fryderyk Chopin Institute for the final concert of the Chopin Year celebrations. On 7 March 2011, Robert Matthew Festing, the Grand Master of the Sovereign Order of Malta decorated Krzysztof Penderecki with the Grand-Croix de L’ordre “Pro Merito Melitensi”.

The year 2013 marked Krzysztof Penderecki’s jubilee. On the occasion of his 80th birthday, the composer’s works were performed at many In 2012, the compositions St Luke Passion and the Double Concerto for violin and viola, written for the 200th anniversary of the Wiener Musikverein, were premiered.

January 2013 in Leipzig saw the premiere of Missa Brevis, commissioned by the Bach Archiv on the occasion of the 800th anniversary of the St Thomas Choir of Leipzig. The premiere of a new version of the opera The Devils of Loudun was held in Copenhagen on 12 February 2013.

On 13 December 2013 at Carnegie Hall, there was the world premiere of Penderecki’s La Follia, a piece written for Anne-Sophie Mutter.

In February 2014, the composer led a series of Polish Requiem concerts with the Israel Philharmonic and The Gary Bertini Israeli Choir. In March 2014, Krzysztof Penderecki was a composer-in-residence at the Curtis Institute of Music in Philadelphia. The same year he was honoured by the President of the Republic of Estonia with the Order of the Cross of Terra Mariana, First Class.

On 25 October 2016, Krzysztof Penderecki and his wife Elżbieta Penderecka received a medal from the Association of Polish Architects in recognition of their contribution to the development of Polish architecture. The premiere of Quartetto per archi No. 4, commissioned by Wigmore Hall with the support of André Hoffmann, took place on 11 December 2016 at London’s Wigmore Hall.

Penderecki’s latest string quartet was written for Belcea Quartet, which premiered the piece. On 8 February 2017, Elżbieta and Krzysztof Penderecki were presented the Professor Aleksander Gieysztor Award for their dedication to musical education, long-term activities to popularize the heritage of classical music in Poland and founding the Krzysztof Penderecki European Center for Music in Lusławice.

On the occasion of the composer’s 85th anniversary, the Deutsche Grammophon label released the Hommage à Penderecki double album showcasing his works dedicated to Anne-Sophie Mutter and performed by the artist.

On 5 September 2018, Krzysztof Penderecki was awarded the Stanisław Vincenz New Culture of New Europe Prize. In November 2018 the composer received the Great Cross of Merit with Star of the Federal Republic of Germany.

On 26 June 2015 in Manchester, the Royal Northern College of Music made Krzysztof Penderecki a Fellow of the Royal Northern College of Music. In 2015, Penderecki composed the psalm Domine quid multiplicati sunt on the 100th anniversary of the Armenian Genocide. The work was premiered on 26 May 2015 at Carnegie Hall with the Hover State Chamber Choir conducted by Sona Hovahnnisyan.