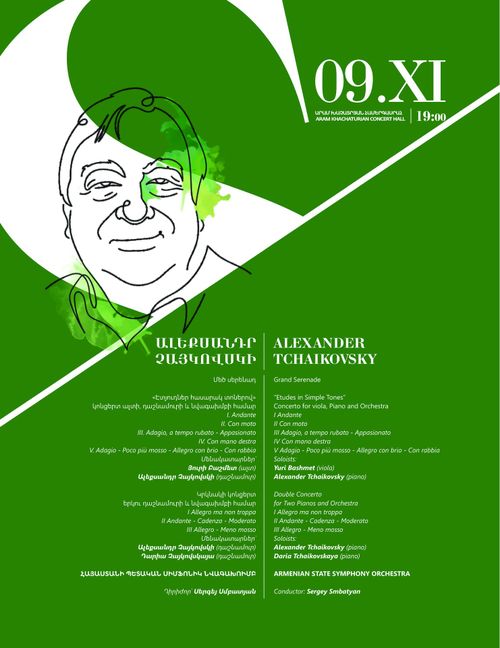 There are certain musicians who God and Fate have destined to follow an artistic path by way of which they become figures in the art of music who open new horizons for future generations. Yuri Bashmet is undoubtedly such a musician, having established the viola as a leading instrument on the contemporary concert stage.

Yury Bashmet is one of the few contemporary musicians whose authority is universally respected.

Film and television companies several countries, including England, France and Russia, have documented Bashmet’s artistry. The Maestro  himself has created and serves as host of the television program “Station of Dreams.”

Yuri Bashmet was born in 1953 in Rostov-on-Don. In 1971, he graduated from the Lvov Special Musical Middle School and entered the Moscow Conservatory, where his teachers were Professors Vadim Borisovsky

and Fyodor Druzhinin. While still a student, he received awards at international competitions in Budapest, in 1975 (2nd prize), and Munich, in1976 (1st prize). His phenomenal gifts as a musician were widely noted at the time. “In terms of interpretive perfection and brilliance of tone, he can only be compared to David Oistrakh,” wrote a German newspaper.

Contemporary composers – among them, Alfred Schnittke, Sofia Gubaydulina, Edison Denisov, Mikhail Tariverdiyev, John Tavener, Ghia Kancheli and Alexander Tchaikovsky – have specially composed for him or dedicated to him more than 50 works.

Yuri Bashmet took up conducting in 1982 and, in doing so, brought added luster to his reputation as a bold and fearless contemporary musician.

Since 2002, Bashmet has served as Artistic Director and Chief Conductor of New Russia State Chamber Orchestra. Subscription concerts in the major concert halls of Moscow have revealed the scale Bashmet’s musicianship. Masterpieces of Russian music, works by Tchaikovsky, Rachmaninov, Rimsky-Korsakov, Prokofiev and Shostakovich; European classics, the music of Bach, Mozart, Beethoven and Schubert; and contemporary works by such composers as Schnittke, Gubaydulina and Kancheli – in all of these, the polished interpretations of the Maestro have served reveal the secrets of their musical language.

Yuri Bashmet and Sviatoslav Richter enjoyed a long-standing artistic friendship and performed together in many concerts in Russia and abroad. Richter served for 16 years as Artistic Director of the worldrenowned “December Nights” festival in Moscow. Following Richter’s death, that position was inherited by Bashmet.

Bashmet is the founder and chairman of the world’s first and only viola competition, which takes place in Moscow.

Bashmet has participated in many important charitable events: at Carnegie Hall in New York, together with Elton John and Stevie Wonder; in London, in memory of Princess Diana; and in concerts dedicated to

raising funds to assist those who suffered from natural disasters in Armenia and Japan and in aid of handicapped children.

It is difficult to overestimate Bashmet’s contribution to world peace. As a citizen of the world and a brilliant musician, his name belongs among those of the leading figures of the 20th and 21st centuries.

“Yuri Bashmet, as an outstanding violist and one of the world’s great

musicians, has revived interest in the viola.”

1998 she became a student of Professor Wladimir Krajnew at the Conservatory of Hannover.

In 1999 Daria enrolled in the Conservatory of Cologne, as a student of Professor Arbo Valdma. 2003 she was awarded 2nd prize in the Int. Piano Competition of Gorizia, Italy.

In 1996 Daria won the 1st prize at the Int. Steinway Competition in Hamburg.

In 1993 Daria made her debut concert with orchestra and enrolled in the Conservatory of Lubeck, Germany as a young student. In the same year she won the German Youth Musicians Competition, repeating the success in 1996 and 1999 in both junior and senior categories.

Throughout her career Daria has performed around Europe, Asia and Scandinavia at festivals such as Sakharov-Festival-Nijni Novgorod in Russia, Schleswig-Holstein-Festival in Germany, Cinema-Russe-Festival de Cannes in France, Kissinger Klavierolympiade, Kissinger Sommer, Festspiele Mecklenburg-Vorpommern and Internationale Musikfesttage Koblenz in Germany, Music Festival of Pitea in Sweden, Grieg Festival Troldhaugen in Norway and others and the honour to perform on famous concert stages as the Glasunow Hall in St.Petersburg, the Rachmaninow Hall and the Chamber Music Hall in Moscow, Konzerthaus Berlin, Laeizhalle Hamburg, Tonhalle Duesseldorf and the Philharmonies of Moscow and Cologne as soloist with orchestras (Kazan Philharmonic, Russian Philharmonic, German Youth Orchestra, Obninsk Philharmonic,Tver Philharmonic, Jarosslavl Philharmonic and other orchestras)and giving solo recitals.

She has attended masterclasses with world-renowned musicians such as Dmitri Bashkirov, Vitaly Margulis, Lev Naumov, Igor Blagodatov and Claude Frank.

Daria Tschaikowskaja was born in Moscow. Coming from a musical family, she started playing piano at the age of six and enrolled in the Gnessin-Music-College for gifted children the following year.

Daria graduated with a diploma from the Accademia Pianistica Imola, Italy (class of Prof. Boris Petrushansky) and also graduated with a diploma from the Conservatory of Cologne (class of Prof. Arbo Valdma) In 2005 she won 1st prize in the Int. Vincenzo Bellini Piano Competition of Caltanissetta, Italy and was to be heard as a soloist accompanying the Young Philharmony of Cologne on a Germany-wide tour. After that, she performed with many world-class orchestras and conductors, among them Moscow State Philarmonic Orchestra, New Russian Orchestra, under Juri Bashmet and Maris Janssons.

Daria has completed her master’s degree at the Conservatory of Cologne, class of Prof. Pavel Gililov.

Prize-winner at the International Composition Competition at the Hollybush Festival in New Jersey (1985; 1st prize).

Actively involved in teaching and public music events, conducts masterclasses in the USA, Canada, Germany and other countries and is a jury member at several competitions. Has written critical articles for various music journals. He was composer-in-residence at the Kissinger Sommer festival (Germany) in 1988 and at the Nova Scotia festival (Canada) in 1995.

Since 1977 he has taught at the Composition Division at the Moscow Conservatory (Professor from 1993 and Head of Department from 1997). Member of the Union of Composers of the USSR (subsequently of Russia) since 1973, of which he was Secretary for Work with Artistic Youth in 1985–1990 and of the Council of which he has been Honorary Chair since 2017. From 1993 to 2002 he was a repertoire advisor for the Mariinsky Theatre. In 2002 he established the music festival Youth Academies of Russia. Has been a professor of the Department of Special Composition and Improvisation at the Rimsky-Korsakov St Petersburg State Conservatory, in 2004 he was pro-rector for international relations of the conservatory and from 2005 to 2008 he was rector. Since 2003 he has been Artistic Director of the Moscow State Philharmonic Society. Vice-President of the Authors’ Council of the Russian Authors’ Society (since 2017). Has been a member of the Council of Directors of Channel One Russia.

Composer of the operas Granddad Laughs (1972, based on works by Ivan Krylov), Three Prozorov Sisters (1995), Tsar Nikita and His Forty Daughters (1997), Motya and Savely – Mozart and Salieri (1999), The Three Musketeers (2007), One Day in the Life of Ivan Denisovich (2009), The Legend of the City of Yelets, the Virgin Mary and Tamerlane (2011), The Violist Danilov (2012), Chess King (2016, based on motifs from Zweig’s Schachnovelle) and Yermak (2019), the ballets The Government Inspector (1980), Battleship Potemkin (1986) and The Queen of Spades (1999), the oratorios Towards the Sun (1982, to verse by Tyutchev), On Behalf of the Globe (1983, to verse by Selvinsky), In My Soul (1996, to verse by Vysotsky), Russian Requiem (2005, to verse by Akhmatova, Brodsky, Tyutchev, Yesenin, Blok, Zabolotsky and the text of Psalm 62), A Sovereign Affair (2013, marking four centuries of the House of Romanov), the symphony The Master and Margarita (1985), the symphonic poem Northern Palmyra Nocturnes (1994), Requiem for Khojaly (2012), the musicals The Sinner (2001) and The Life and Incredible Adventures of Oliver Twist (2014), the operetta The Provincial (1997) and concerti for piano, violin, viola, cello, double bass, bassoon, saxophone, string quartets, piano trios, ballad songs, sonatas and suites among numerous other opuses as well as music for cinema, TV films and theatre productions.

Recipient of the City of Moscow Prize for Literature and the Arts (2011), the Dmitry Shostakovich Prize (2011) and the Government of the Russian Federation Prize for Culture (2016).

Etudes in Simple Tones
Concerto for Viola,
Piano and Orchestra